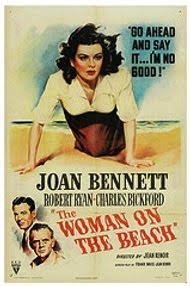 Woman on the Beach, released in 1947, was the last of Jean Renoir’s American movies. It left him totally disheartened by studio interference and public indifference, and disillusioned with the film itself. RKO forced him to radically recut Woman on the Beach, and as it stands the movie feels unfinished and at times becomes more than a little obscure. It feels like a movie that’s had huge chunks cut out of it.

A coast guard officer (Scott, played by Robert Ryan) suffering from wartime trauma (presumably as a result of being on a torpedoed ship) is engaged to a sweet local girl. She’s ideal wife material, and he can’t wait to get married. That is, until he meets a mysterious woman on the beach (Peggy, played by Joan Bennett). She’s married to Tod Butler (Charles Bickford), a painter, but her husband is now blind. She’s wild, sexy, passionate and longing to escape from a marriage that is little more than a prison sentence. She and Scott fall in love. The three of them soon become involved in a tense and very unhealthy love triangle, with Tod baiting both his wife and Scott.

The exact nature of Tod’s feelings for his wife, and her feelings for him, remain enigmatic, a mixture of love and hate, jealousy and possessiveness, sexual obsession and sexual repulsion. In some ways they’re both imprisoned, by the past and by an inability to let go. Scott blunders in, utterly out of his depth, and the situation spiral dangerously out of control. All three find themselves playing dangerous emotional games, and all three are unstable to begin with.

Bickford and Ryan give fine edgy performances. Joan Bennett has one of her most rewarding roles, playing a woman who is superficially a typical film noir femme fatale but is in fact more complex than that. While contemporary audiences would certainly have seen her as very much a dangerously sexual Bad Girl, modern audiences are more likely to see her the way Renoir presumably saw her, as a much more ambiguous character, both victim and tormenter. She uses her sexuality as a weapon, but she is just as much at its mercy as anyone else.

The psychological complexity and the fact that the characters all have valid motivations for their actions, even when those actions are destructive, are the movie’s great strengths. Renoir’s reluctance to cast any of his characters as clear-cut heroes or villains is presumably what upset RKO executives so much. That, and the very overt sexuality. The scene where Tod is anxious to show Scott a nude painting of his wife must have seemed very perverse indeed in 1947. Even as butchered at the behest of RKO it’s a powerful and disturbing movie, which makes it even sadder that the scenes Renoir was forced to cut are apparently now lost forever.

It’s both film noir and gothic romantic and sexual melodrama, and an absolute must-see movie. Even more so if you happen to be a Joan Bennett fan.