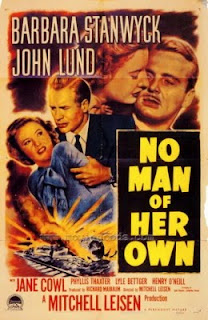 The 1950 Paramount production No Man of Her Own is yet another film noir based on a Cornell Woolrich story, in this case his novel I Married a Dead Man (which he originally published under the pseudonym William Irish). Barbara Stanwyck plays a pregnant unmarried woman who finds herself mistaken for someone else after a train crash. She finds the temptation to continue playing along with the deception too much to resist, but naturally complications ensue.

Eventually her past catches her up to her and she finds herself in a nightmare situation with nowhere to turn for help.

The story is told using flashbacks, which is more or less the way the story unfolds in the book. Mitchell Leisen’s direction is solid. The film noir aspect of the movie come mainly from the twisted plot and the use of flashbacks - visually it isn’t really in the noir style at all. 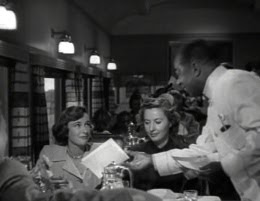 Stanwyck is terrific, and there’s a strong supporting cast. It follows the novel very closely until the ending. It’s a pity they felt the need to change the ending, but perhaps it was too ambiguous to satisfy the Production Code. While the film’s ending is ingenious and reasonably satisfactory, it lacks the brilliance and breath-taking horror of Woolrich’s ending and weakens the movie considerably.

It’s still a very fine movie, and it’s definitely a must for Stanwyck fans.
Posted by dfordoom at 6:39 PM