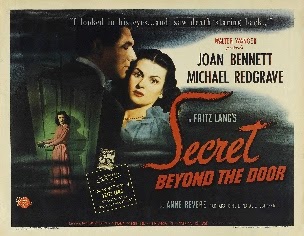 The 1940s was the decade that saw HoIlywood discover Freud, and it witnessed the birth of a new genre, the psychoanalytical thriller. The best-known example is Hitchcock’s Spellbound, although personally I’m very fond of an obscure little 1945 MGM programmer called Bewitched. It was inevitable that Fritz Lang would try his hand at this genre, which he promptly did in 1948 with Secret Beyond the Door…. A proper psychoanalytical thriller must have at least one dream sequence, which this one has. 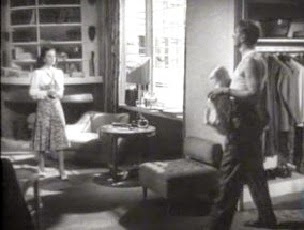 Joan Bennett is Celia, a wealthy woman bored by the men in her life until she meets a handsome and charming architect while on holiday in Mexico. Mark (Michael Redgrave) seems to be the ideal man, intelligent, intellectually stimulating, sensitive and artistic. After a whirlwind romance they marry. The problems start when they move into his mansion in the country, an hour or so from New York.
Mark has already shown signs of sudden emotional switches, but in the overheated and rather gothic atmosphere of this mansion, this emotional instability becomes more and more alarming.

The presence of Mark’s sister and the mysterious Mrs Robie, an employee with a hold over Mark, complicated matters. Mark clearly has issues with women, staring with his mother (who died in slightly odd circumstances) and continuing with his first wife (who died in very odd circumstances indeed). There’s also Mark’s son, who appears to have even more mental health issues than his father! He’s a very disturbing young man indeed. 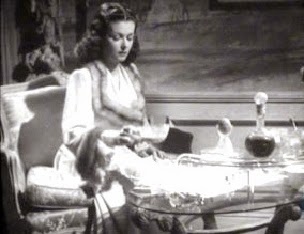 Mark also has an unusual hobby. He collects “felicitous” rooms. On being told about this his new bride assumed they were rooms in which fortunate things happened, but it turns out they’re actually rooms that proved themselves to be ideally suited to murder! He doesn’t just reproduce the rooms, but re-creates them including all the original objects found in the rooms at the time of the murders in question.

Michael Redgrave had already demonstrated his gift for portraying individuals who were disturbed to the point of being positively deranged in the excellent British 1945 horror movie Dead of Night. His performance in Secret Beyond the Door… is equally good. Joan Bennett is, as always, superb. It’s difficult in this day and age to take psychoanalytical thrillers all that seriously, with their somewhat half-baked Freudian ideas, but they’re always entertaining and this one is no exception. It’s a well-crafted and thoroughly enjoyable film. Highly recommended.
Posted by dfordoom at 8:46 PM