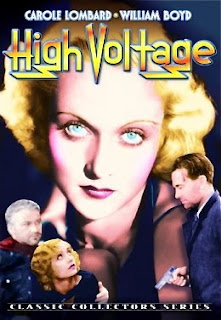 The main claim to fame of High Voltage is that it provided Carole Lombard with one of her very early starring roles. Made in 1929, it’s a kind of romance thriller which, despite the title, fails to generate very much electricity.

A bus is stranded in a snow storm somewhere in the Sierra Nevadas (I think it’s the Sierra Nevadas, but my knowledge of American geography is very sketchy). The driver and passengers make it to a deserted church, where they discover a mysterious stranger (played by William Boyd) who offers no explanation for his presence there. Lombard is a escaped female prisoner being taken back to the penitentiary by a rather taciturn lawman. As the storm worsens they find themselves trapped, their whereabouts unknown, and with very little food. Tensions rise, and of course romance blossoms. Meanwhile the food supply dwindles, and one of the other passengers, a slightly innocent young woman, starts to sicken from lack of nutrition.

Lombard is reasonably good, and wisely doesn’t overdo the hard-bitten female convict routine. She’s a little on the cynical side, but she’s generous and likeable. The plot suffers from a rather hokey ending, but the main problem with the film is simply that it’s a very early talkie, with the clunkiness and slow pacing that afflicted the talkies until the technology improved and allowed the camera to start moving freely again.

It’s moderately entertaining, and it gives Carole Lombard fans the chance to see her in an early non-comedy role. It’s in the public domain so it’s easy enough to find cheap copies, or even free online copies, and as long as you don’t pay more than a couple of dollars for it and you don’t have excessively high expectations High Voltage is probably worth a look.