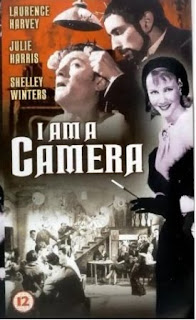 The 1955 British film I Am A Camera was based on John van Druten’s play of the same name, which was in turn based on Christopher Isherwood’s Berlin stories, with both Isherwood’s story and the play providing the basis for the much better known (and infinitely superior) 1971 movie Cabaret.

A young English writer in Berlin in the dying days of the Weimar Republic meets English nightclub singer and would-be adventuress Sally Bowles, who makes his life very complicated indeed. The movie aims for a more comedic approach than I expected, and I don’t think it entirely works although it has some amusing set-pieces.

This movie has several serious problems, the biggest being that it was made in 1955 so it has to pretend that the Isherwood character is heterosexual. Which of course means that his relationship with Sally Bowles becomes inexplicable. There’s plenty of sub-text, with Christopher describing himself at the beginning of the film as a “confirmed bachelor,” and with plenty of other hints that the character is actually gay. But the dynamics of the plot just don’t work with everybody pretending to be heterosexual.

A further problem is the disastrous miscasting of Julie Harris as Sally Bowles. I know she played the role on Broadway as well, but she’s completely wrong. She tries her hardest, and she has her moments, but she’s too much like a prim clergyman’s daughter playing at being decadent by sneaking an extra glass of sherry while the vicar isn’t looking. She also fails to show us Sally’s vulnerability, without which the character remains ultimately lifeless and uninteresting. Of course it’s impossible now not to compare her performance to that of Liza Minnelli, which makes it even more difficult to appreciate Harris’s performance. And being 1955, this version of Berlin decadence in the 20s isn’t terribly decadent either.

Laurence Harvey is reasonably good as Christopher, within the limitations of the script. Anton Diffring as the would-be gigolo Fritz steals every scene he’s in. Shelley Winters is also miscast, but also tries her best. Henry Cornelius’s rather lackustre directing and the generally rather flat look of the film don’t help. Since we have Bob Fosse’s 1971 masterpiece I have to conclude that sadly there’s really no reason any reasonable person would want to see this movie, except as a historical curiosity.
Posted by dfordoom at 10:52 AM