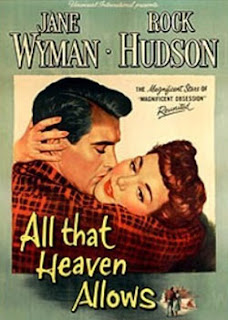 It’s the story of middle-aged widow Cary (Jane Wyman) living in a small town who falls in love with her gardener, played by Rock Hudson. Not only is he considered by the county club set (to which the widow belongs) to be a mere tradesman, which is scandal enough, he’s only much younger. And extremely handsome. Scandal piled upon scandal.

And it soon becomes obvious that her children (her truly appalling children) are as narrow-minded as the rest of the town. Early on Cary has a discussion with her daughter (played in outrageously over-the-top style by Gloria Talbott) about the Egyptian custom of walling up widows alive, and remarks that it’s a custom that is no longer followed – not in Egypt, anyway. The custom seems to be alive and well in this small town though. 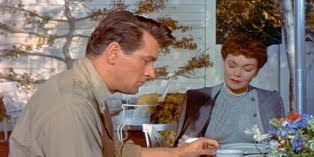 Photographed by the great Russell Metty, this movie is visually luscious – I can’t think of a better word to describe it. The colours! There’s just so much to take in visually. A very lush score adds to the overheated atmosphere. Wyman is an actress I’ve never liked, but she’s reasonably effective. And while it's not likely that anyone would claim that Rock Hudson was a great actor, he is quite perfect for Sirk’s purposes, and his performance works to perfection.

Sirk was regarded with scorn by serious critics at the time, but his reputation has grown steadily since then. His mastery of visual style is clearly one reason for this. His movies are also admired for their irony, and as scathing criticisms of the emptiness and hypocrisy of the American consumer society of the Eisenhower era. And they are indeed scathing; in fact they’re absolutely savage. You have to wonder how American audiences at the time could have seen these films and not noticed their merciless dissection of the most cherished values of Middle America. What’s really interesting about Sirk’s movies, though, is that he takes his characters seriously – their pain is real, the dilemmas they face are real, and although he mocks the society in which they live he doesn’t mock their suffering. 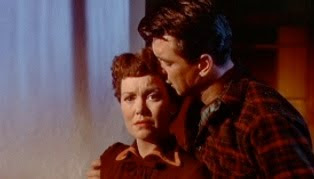 as is that they belonged to a genre, the so-called women’s picture, that was regarded with contempt (and still is when you consider the way “chick flick” is used today as a term of derision), but he was a serious film-maker making serious films. The irony in his movie does not in any way diminish Sirk’s seriousness of purpose. They may be in many ways high camp, but they’re made by a director with a high art sensibility, and they manage to be high camp and high art at the same time. Like the Pop artists who were emerging at the same time, he blurs the line between trash and art.

Now I simply must track down copies of all of Sirk’s other movies!
Posted by dfordoom at 8:11 PM