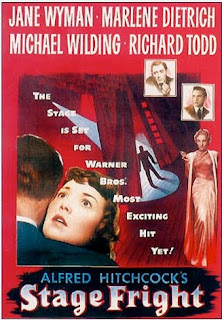 Stage Fright, made in England in 1950, is usually considered to be one of Alfred Hitchcock’s minor films. If you compare it to the movie he made next, Strangers on a Train, that’s probably a fair assessment.

Having said that, there’s an awful lot to like in Stage Fright. For one thing it has one of the strongest casts Hitchcock ever got to work with. Jane Wyman, an actress I’ve never taken much notice of, is both likeable and delightfully kooky as Eve, the heroine. Marlene Dietrich is simply fabulous as Charlotte, an actress/singer whose husband has been murdered.

And there’s a veritable galaxy of British acting talent. Richard Todd gives a powerful performance as Johnny, the man accused of murdering Charlotte’s husband. Michael Wilding is likeable as the police detective hunting him down. Alastair Sim and Sybil Thorndyke are great fun as Eve’s eccentric parents. And there’s an uproarious cameo by the fabulous Joyce Grenfell.

The emphasis is on fu 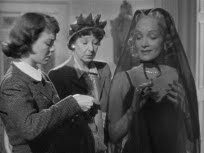 n in Stage Fright. It’s very much a comedy thriller, and with so many people in the cast who are so good at comedy it works very well on that level. Here aren’t too many spectacular Hitchcock set-pieces, but there are some superbly filmed scenes demonstrating Hitch’s mastery of atmosphere as well as technique – especially a scene late in the picture between Richard Todd and Jane Wyman, a scene that is an object lesson in the use of lighting.

All the scenes involving Marlene Dietrich are magnificently filmed, particularly another crucial scene late in the movie just after Charlotte has been confronted by Eve. It’s a role tailor-made for Dietrich - 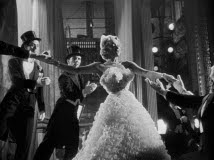 she gets to sing, she gets to be glamorous, she gets to show her serious acting chops and she gets to be funny, and she does it all with tremendous style. Not too many Hitchcock films feature show-stopping musical numbers, but this one does – Dietrich singing I’m the Laziest Girl in Town.

Stage Fright might not be one of Hitchcock’s great films but it’s fantastic entertainment, an underrated movie that is very much worth seeking out.

Warners Region 4 DVd includes a documentary on the film, and the movie itself looks terific.
Posted by dfordoom at 12:07 AM