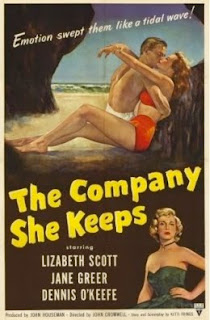 With a cast that includes a couple of major film noir icons, Lizabeth Scott and Jane Greer, and with Dennis O’Keefe (who also did some classic noirs including the underrated Raw Deal) as the male lead, and photographed by by one of the great masters of noir cinematography in the person of Nicholas Musuraca, you could be excused for expecting John Cromwell’s The Company She Keeps to be a film noir.

In actual fact it’s a drama/romance, although it does have quite a bit in common with Caged, an excellent women’s prison drama made a year earlier by the same director. The Company She Keeps follows the story of Mildred Lynch, a woman prisoner out on parole. Things get complicated for her when she falls in love with her parole officer’s boyfriend. It makes a fascinating companion piece to Caged. And like that movie, its attitude towards the criminal justice system is a quite a bit more sceptical than you’d expect in a 1951 movie. Although the parole officer is somewhat idealised, the other members of the parole board are portrayed as being rat 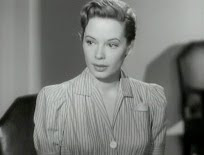 her petty and the police are shown mostly as petty tyrants who enjoy harassing ex-cons. On the other hand there’s also a sympathetic cop willing to give Mildred a break.

The movie’s strong suit is its avoidance of a simplistic good girl/bad girl conflict between the two romantic rivals. Both women are more complex than that. Jane Greer is superb as Mildred. I like the fact that she’s not depicted as an innocent victim. She was guilty of the crimes for which she was sentenced, and had a lengthy record of petty crime before that. Her natural inclination is to return to her previous life, and she’s bitter and suspicious, and tends to lie as a matter of course, and certainly not scrupulously honest. Despite all that, she’s basically a sympathetic character and is making a genuine effort to keep out of trouble. 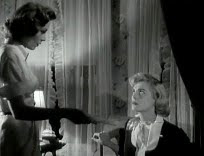 Lizabeth Scott has the less rewarding role as the parole officer, Joan Wilburn. The part is somewhat underwritten. She doesn’t get enough screen time, and we don’t get sufficient insight into her emotional reaction to the betrayals she suffers. Lizabeth Scott does the best she can with what she’s given, and I like the way she underplays the role. She’s a woman trying to make it in the very male-dominated world of the 1950s prison system, and it makes sense that she would have developed a habit of hiding her emotions. She’s not a paragon of virtue either - she’s aware of the temptations inherent in the power she holds over Mildred, and she doesn’t always resist those temptations. So again we have a character who is not simply black or white 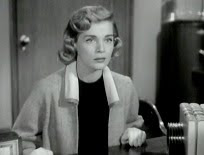 , good or bad, but is essentially good with the usual human weaknesses.

Dennis O’Keefe is the man loved by both women. The focus is very much on the two women, but he gives a nicely understated performance.

Overall this is a movie that offers a lot more than you might expect. It’s a good example of a quality B-movie that deals with serious subject matter in a surprisingly subtle way, without resorting to cliches or being excessively obvious. With fine acting, with the very competent John Cromwell directing and with Nick Musuraca’s cinematography it’s a movie that looks good and works rather effectively. This one is well worth a look.
Posted by dfordoom at 8:08 PM