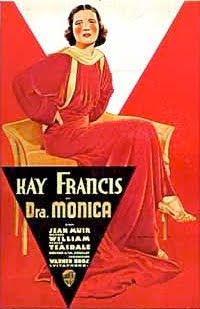 Sometimes, after watching an old movie, one simply doesn’t know what to say. One can only stare at the screen in horrified fascination, mumbling to oneself, “These people were not like us. The past truly is a foreign country.” Such was my experience with the 1934 Warner Brothers picture Dr Monica.

To dispose of the easy stuff first. Kay Francis plays a successful obstetrician (the Dr Monica of the title) with a wonderful husband named John (played by Warren William). Her happiness would be complete if only they could have a baby. What Dr Monica doesn’t know is that her perfect husband has been fooling around with a young pilot named Mary. And while Dr Monica is unable to conceive a child, Mary not only can conceive, but has done so, and yes, the baby is John’s.

It’s the resolution of this romantic triangle complicated by the presence of the child that left me speechless, but you’ll have to watch the movie to make up your own mind. To sa 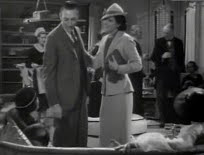 y more would be to reveal spoilers. This is a pre-code movie, and while it does deal openly with the subjects of adultery and children born out of wedlock, and even with the even more taboo subject of abortion, I’m not sure if one could really say that it deals with these subjects intelligently, or even sanely.

While it doesn’t resort to the hypocritical denial of reality that became the hallmark of post-code Hollywood, it has its own truly bizarre moral solu 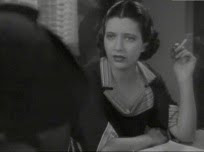 tions, and seems to enshrine a weird belief in the healing power of lies and deceit. And it applauds a kind of feminine self-sacrifice that I find utterly chilling. It just shows the many strange and twisted (and in this case bizarre and imaginative) ways in which conventional morality could destroy lives.

Kay Francis and Warren William are both very good, while Jean Muir gives an extraordinarily annoying performance as Mary.

It’s one of those very odd pre-code movies that you really have to see for yourself!
Posted by dfordoom at 9:00 AM