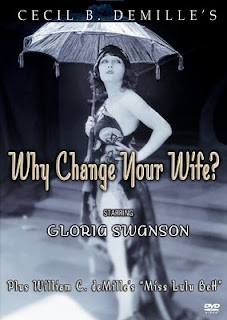 In Cecil B. DeMille’s 1920 comedy Why Change Your Wife? Gloria Swanson (DeMille’s regular leading lady of this period) as Beth, a respectable and rather prim wife who discovers that husbands don’t necessarily want their wives to be respectable and moral. It’s not that he doesn’t love her; he just wants a little romance in his marriage, and when another woman comes along who offers him the excitement he craves, he inevitably strays. And divorce inevitable follows.

Beth then has a sudden revelation – maybe it’s not only true that men like shameless hussies, but maybe it’s also true that shameless hussies have quite a lot of fun. So she decides to transform herself into a sexpot. This is a typical early DeMille comedy. His comedies are as far removed from the stereotyped idea most people have of silent comedy as it’s possible to get. You won’t find any slapstick in his movies. His comedies are sophisticated, witty and cheerfully immoral. The message in this one is that if you want a happy marriage, forget virtue – it’s love and sex and fun that makes for matrimonial bliss. 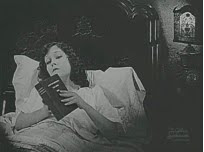 Swanson is, as always, delightful. She manages the transition from dowdy housewife to vamp with ease. Thomas Meighan as the husband and Bebe Daniels as the woman who steals him both provide great support. And the 1920s women’s outfits are outrageous and gorgeous, especially Swanson’s scandalous (and by today’s standards charmingly bizarre) bathing suit. It’s a movie that captures the spirit of the 1920s rather wonderfully, and it’s great fun. 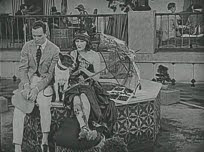 Swanson Collection was much criticised on its release, which I think was a little unfair. The transfers are certainly variable in quality, but these are great movies made available at a ridiculously low price, and I think it’s an absolute must-buy for any silent cinema fan.

And it provides an introduction to a world of silent movies that is unfamiliar to most people, a world of elegant comedies of manners, and at times surprisingly risque sex comedy. DeMille’s silent comedies are an absolute joy.
Posted by dfordoom at 7:12 PM