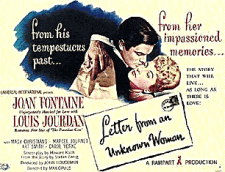 Letter from an Unknown Woman was one of the three movies Max Ophüls made in Hollywood in the late 40s. All three are wonderful in their own ways, but this may be the greatest of them.

The movie follows a circular path, as fate inexorably closes in on the leading characters. It starts with somewhat dissipated pianist and man-about-town Stefan Brand (played by Louis Jourdan) being reminded that the next morning he is to fight a duel, a duel he is unlikely to survive. But Stefan has rarely accepted responsibility or anything, and intends to flee the city before morning. His preparations for flight are delayed by the arrival of a letter, a letter from a w 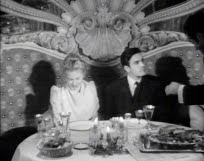 oman. He does not know her name, and has no recollection of her at all, but as he reads he discovers that their paths have most certainly crossed and in a most fateful fashion.

In 1900, as a romantic and somewhat dreamy schoolgirl in Vienna, the woman (Lisa, played by Joan Fontaine) had become obsessed by the handsome and charming pianist who lived in the apartment upstairs. On several occasions over the course of the next few years fate has drawn her to make attempts to meet this man. Finally she succeeds, they have a brief but idyllic love affair, but while this is the great love of Lisa’s life for Stefan she is merely another sexual adventure. This has tragic consequences for Lisa, and equally tragic 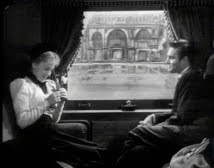 consequences for Stefan as he realises much too late that she could have been much more to him than a casual conquest. She could have been not only the woman with whom he might have found genuine love, she could also have saved him from throwing away his talent.

Joan Fontaine, in her usual self-effacing but oddly compelling way, totally dominates the film. Her understated performance (and of course the consummate skill of Ophüls as a fim-maker) saves it from the danger of maudlin sentimentality. It’s still an emotionally draining experience but there’s nothing false or contrived about the emotion.

A magnificent example of what could be achieved in Hollywood during the 1940s, and one of the great cinematic love stories.
Posted by dfordoom at 9:37 AM