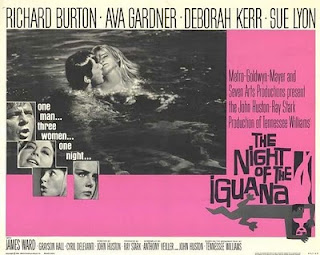 The Night of the Iguana, based on Tennessee Williams’ play, was directed by John Huston and released in 1964.

It’s the story of drunkard defrocked clergyman Rev. T. Lawrence Shannon (played by Richard Burton) who works as a tour guide in Mexico. His life reaches a crisis as he’s escorting a busload of female Southern Baptist school-teachers. Unfortunately for Shannon one of the teachers is chaperoning Charlotte, an under-age girl who has even more unfortunately decided that she’s madly in love with the reverend. And more unfortunately still the teacher who is chaperoning Charlotte already hates Shannon and is determined to see him fired from his job, and preferably gaoled for sexual misconduct with a minor. 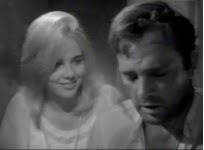 He finds refuge in a seedy hotel run by an old friend of his, the colourful Maxine Faulk (Ava Gardner). Maxine has problems of her own to grapple with, most notably her severe and chronic lack of a bed partner after a sexless marriage. At this point Hannah Jelkes (Deborah Kerr) and her elderly grandfather, who eke out a living giving poetry recitations and doing sketches, arrive. Hannah Maxine has the opposite problem to Maxine – she’s severely sexually repressed.

So what we have are exactly the sort of characters we expect from Tennessee Williams, and an ideal line-up of actors to play them.

Deborah Kerr is terrific as always. Sue Lyon is unexpectedly impressive as Charlotte. For Richard Burton it’s an ideal role, the kind of thing that gives him the opportunity to overact outrageously but effectively, and he makes the most of it.

But it’s Ava Gardner who steals the picture, giving the performance of her career.

The end result is a very fine movie. In fact it’s the best ever movie adaptation of a Tennessee Williams work, and one of Huston’s two or three best pictures.
Posted by dfordoom at 4:16 AM