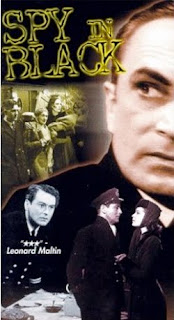 For a movie made right on the eve of the Second World War The Spy in Black is a rather bold endeavour. And coming as the first of many celebrated cinematic collaborations between director Michael Powell and screenwriter Emeric Pressburger it’s an even bolder choice of material.
This is a spy movie, and a very entertaining one. The twist is that it’s told from the German point of view, and the main German spy is a very sympathetic character.

Captain Hardt (Conrad Veidt) is a U-boat commander assigned to a dangerous secret mission on enemy soil. A German agent has managed to infiltrate herself into a position very close to Britain’s main naval base at Scapa Flow in the Orkney Islands. She has also managed to make contact with a disgruntled alcoholic Royal Navy officer, and making use of a mixture of sex and his resentment at his supposed bad treatment by the Navy she has persuaded him to betray some vital naval secrets. And an audacious plan is hatched, to sink the British Grand Fleet in its achorage.

Captain Hardt lands in the Orkneys, in northern Scotland, and makes contact with the German spy. Like all good movie spies, she is young, female and glamorous.

Of course things aren’t as simple as they seem on the surface, and the double-crosses have started right at the beginning of the film although we aren’t aware of them at that stage. And there are plenty more plot twists to come. Powell and Pressburger have created an exciting t 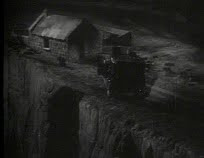 ale of espionage and intrigue, but (as you’d expect from these two) there’s a good deal more to the film that that.

Captain Hardt is basically a nice guy. He’s not at all a typical movie villain; in fact he’s much closer to being a typical movie hero. He’s brave and resourceful, and he’s a decent human being. And he’s likeable. And of course he’s not really a spy. He’s simply a German officer carrying out his orders. Although he is operating in the British Isles he insists on wearing his German officer’s uniform, to emphasise that he is no traitor, but a man serving his own country. His female compatriot is in a more awkward position, as she points out to him. If captured she will be simply be shot out of hand as a spy. And yet she is also a German doing her duty a 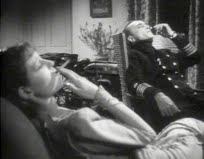 s she sees it.

The fundamentally false position of anyone involved in espionage or counter-espionage work, the fact that they are courageous and dedicated and yet the very nature of the work they do is based on deceit and often involves murder, is very much the theme here. As it also is in another celebrated British spy movie, made three years earlier - Alfred Hitchcock’s Secret Agent. Is it possible to do this kind of work and yet remain honourable? What makes this particular movie so radical is that the German spy in question does keep his integrity, perhaps more so than some of those who are opposing his efforts.

In fact Hardt’s tragedy i 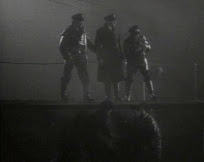 s perhaps his own integrity. He lacks the utter ruthlessness and lack of scruple to be a completely successful spy.

Valerie Hobson is very good as the German agent in the Orkneys. Sebastian Shaw is adequate as the traitorous British officer. But the film belongs to Conrad Veidt as Captain Hardt. Veidt rarely turned in anything less than an impressive performance, as he makes Captain Hardt disturbingly human. You can’t help hoping that he gets away with it!

But the movie doesn’t make a simplistic case for either side. The morally dubious methods of submarine warfare practised by the Germans, including Captain Hardt, are not glossed over. And he is a man who is not entirely easy with his conscience.

Even this early in their careers Powell and Pressburger were making it clear that they were going to be a force to be reckoned with in the film world, and The Spy in Black is a commendable debut.
Posted by dfordoom at 1:48 AM