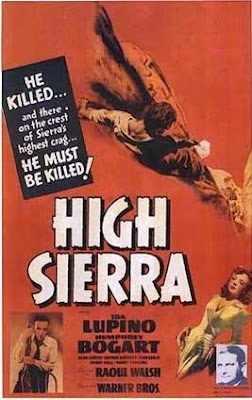 In 1941 High Sierra made stars of both Humphrey Bogart and Ida Lupino and it was one of the movies that started the trend later to become known as film noir.

Bogart is Roy Earle, a bank robber who has just been released from prison after a pardon was issued, apparently organised by his former underworld colleagues. His old crime boss ants him for a major job on the West Coast, an ambitious hotel robbery. Roy heads west to meet up with the rest of the gang.

On the road he encounters a family who seem to have stepped straight out of John Ford’s The Grapes of Wrath. The family includes an attractive girl with a club foot. The girl is named Velma (Joan Leslie) and this is the first sign that Roy Earle isn’t a mere thug. He helps out the grandfather after a traffic accident and he ends up paying for an operation to fix Velma’s foot. And he falls for Velma. 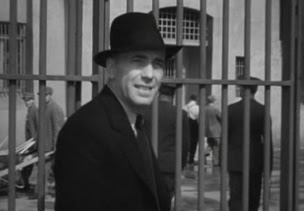 His rendezvous with the other hotel robbers (Babe and Red) is a fateful one, since he also meets Marie (Ida Lupino). Both Babe and Red want her and Roy is initially inclined to send her back where she came from. He has no problem with dames but he can see that there’s going to be big trouble between the two men over her and someone is likely to get shot. Marie manages to persuade him to let her stay however, our second sign that Roy is a very soft-hearted hoodlum.

In fact it’s soon pretty obvious that Marie is more interested in the middle-aged Roy than she is in either of the two young punks. And he’s getting to be interested in her.

Of course you know the robbery isn’t going to go smoothly, and Roy and Marie end up on the run. Accompanied by an engaging mutt named Pard. Roy was also too soft-hearted to leave the dog behind. You’ve heard of the Whore with a Heart of Gold. Well Roy Earle is the Gangster with a Heart of Gold. Stylistically it’s perhaps more like a western than a film noir with most of the crucial scenes, including the climactic ones with Roy and Marie on the run, taking place in the great outdoors, in the foothills of the Sierras. Raoul Walsh was an ideal director for this type of movie and does his usual very fine job.

The script (by John Huston and W. R. Burnett based on Burnett’s novel) stretches credibility quite a bit. It has the kind of noir cynicism mixed with romanticism that you get in several of Huston’s noirish movies, especially The Asphalt Jungle (also based on a W. R. Burnett novel). The problems with the script don’t really matter with both Bogart and Lupino in great firm. Bogart’s career had taken years to take off with several false starts but by the beginning of the 40s things were finally falling into place for him. Perhaps most importantly, Warner Brothers were starting to make movies that were tailor-made for him. Lupino had had similar problems. She’d been making movies for a decade (she was 13 when she scored her first movie role in Britain) but had failed to find her niche. In 1940 Bogart and Lupino both landed great roles in They Drive By Night which set them up for their breakthrough in High Sierra.

Bogart is extremely impressive, especially given that the character as written is scarcely believable. But Bogart makes us believe in him. One of the more interesting aspects of the movie is that we have Joan Leslie as Velma set up to be the good girl and Lupino as Marie set up to be the bad girl, but that’s not how it pans out. Marie is as complex as Roy Earle but she’s more convincingly written. Lupino is superb.

It’s only real claim to noirness is that we have two sympathetic protagonists who clearly have the odds stacked against them. If it isn’t a real film noir it’s still a fine example of 1940s Warner Brothers film-making.
Posted by dfordoom at 12:30 PM