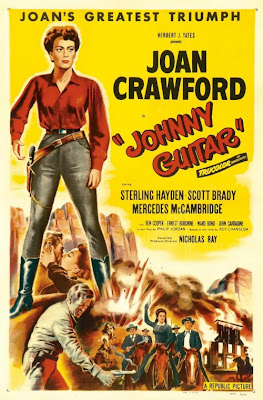 The Hollywood western produced some strange mutations during the 1950s (Sam Fuller’s Forty Guns comes to mind) but surely there were none stranger than Nicholas Ray’s 1954 Johnny Guitar.

Vienna (Joan Crawford) runs a saloon on the outskirts of a cattle town. A railroad is going to be built in the not-too-distant future at which point Vienna is going to make a killing. She’s friendly with the Dancing Kid and his gang, but she has an arch-enemy in the form of Emma Small (Mercedes McCambridge). When the stagecoach is held up and Emma’s brother is killed the Dancing Kid’s gang are prime suspects but Emma has no doubt that Vienna is really behind it. Then a mysterious stranger rides into town. He doesn’t carry a gun, but he does carry a guitar. This is Johnny Guitar (Sterling Hayden).

You may have noticed that so far the plot doesn’t seem to make a great deal of sense. If you watch the movie you’ll find that in fact it makes no sense at all. Emma is in love with the Dancing Kid. He makes her feel like a woman, so she wants him dead (no, I don’t understand it either). The Dancing Kid prefers Vienna, but this seems to be just a small part of the extraordinary hatred that Emma feels for Vienna. And it soon transpires that Vienna and Johnny Guitar are old flames, so the Kid gets his marching orders. The kid is so annoyed at being unjustly accused of robbing the stagecoach that he decides to rob the bank. No, I don’t understand that either.

A posse is formed, and they’re out to get the Dancing Kid and Vienna. We’re also bout to learn that Johnny Guitar isn’t what he seems. The plot lurches to an insane and extravagantly strange finale.

This is a Nicholas Ray film. I haven’t been impressed by any of his films and his reputation among European intellectuals seems to me to be a good reason for doubting the sanity of European intellectuals. Johnny Guitar may well be his worst movie. It may also well be his best movie. It’s such a bizarre train wreck that it becomes truly fascinating, and (unlike other Nick Ray films) it becomes weirdly entertaining. They don’t make movies like this any more.

The plot appears to be a very clumsy statement about the McCarthy witch-hunts, a subject that rapidly becomes tiresome. There’s also some distinctly odd sexual politics but disentangling the actual intentions of this movies is beyond my humble abilities.

Joan Crawford gives one of her oddest performances. It’s not exactly a bad performance but it’s clear she has no idea what the movie is supposed to be about. Nor does anyone else. Mercedes McCambridge doesn’t just chew the scenery, she swallows it whole. Sterling Hayden is entirely wrong as a leading man for Joan Crawford, which in the context of this movie makes him just right. Ernest Borgnine does his best in a supporting role.

Martin Scorcese provides a brief introduction on the DVD. His most interesting point is Ray’s odd use of colour, with very few blues. Why are there so few blues? If Scorcese knows, he’s not telling.

This movie is so weird that I think it’s fair to describe it as a must-see movie, if only because you just won’t believe it unless you do.
Posted by dfordoom at 4:48 PM