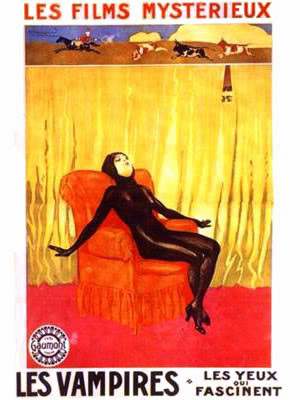 Louis Feuillade enjoyed huge success with his Fantômas serial in 1913. Apart from their commercial success they were immensely influential on the future course of various popular film genres. Fantômas was perhaps the cinema’s first great diabolical criminal mastermind. Feuillade repeated his success in 1915 with Les Vampires.

The ten episodes of this crime/action/adventure epic have a total running time of well over six hours but of course you’re not meant to watch it in one sitting. Spread out over a week or two it remains consistently entertaining and with no danger of boredom.

This is not a supernatural thriller - The Vampires are a vast, powerful and mysterious criminal gang. But nemesis is at hand, in the form of crusading newspaper journalist Philippe Guérande. He will stop at nothing to destroy the gang and finds an unlikely accomplice in a reformed crook named Mazamette.

Guérande and the vampires do battle through the course of numerous ingenious plots and subplots.

The great stroke of genius that Feuillade came up with for Les Vampires was the character of Irma Vep. Irma Vep, an anagram of vampire, was possibly the screen’s first great femme fatale (although Theda Bara stared her Hollywood career in the same year so it could be argued that the screen vamp was invented simultaneously and independently at the same moment in France and the US). Irma Vep is a wonderful character - she’s sexy, glamorous and delightfully wicked and she rapidly comes to dominate the serial.

Both Philippe Guérande and Irma Vep adopt a series of disguises so you need to be on your toes.

When he made Fantômas film technique was still quite primitive. There was comparatively little editing, close-ups had not yet been thought of and the camera remained stubbornly static. Even worse, camera setups were standardised - almost everything was filmed in long shot or medium long shot. The result could be visually very dull (which is a major problem in Theda Bara’s one surviving movie A Fool There Was).

Feuillade came up with several solutions to this problem. He composed his shots with considerable flair and usually in depth. There are often three distinct visual planes, and something is happening in each one of them. There are doors everywhere, with characters constantly entering and exiting. As a consequence there is always much more of a sense of dynamism and movement than you might expect.

By the time he made Les Vampires just two years later technique had advanced quite a bit. There are occasional close-ups, there’s a lot more editing, there are pans and there are several quite ambitious tracking shots. Camera setups are much more varied. At the same time Feuillade has not abandoned his penchant for composing shots in depth. Les Vampires feels exciting and dynamic.

The acting is melodramatic, but that suits the material. The undoubted star is Musidora as Irma Vep. It’s a spirited and energetic performance. Irma Vep was not just one of the first legendary movie bad girls, she remains one of the best.

Les Vampires has enormous historical significance and it’s terrific fun. Is it a must-see? I would have to say that yes, it really is.

There have been a number of DVD releases. The Artificial Eye Region 2 release is the one I have - it might not be the best but it’s relatively easy to obtain and not too expensive. Picture quality is generally very good indeed for the age of the movie.
Posted by dfordoom at 5:58 PM