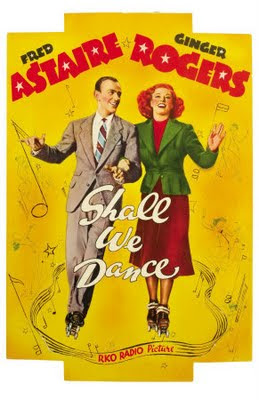 Shall We Dance was the seventh of the Astaire-Rogers musicals and more or less follows the formula that had proven itself so successful up to that time. The plot is thin, there’s plenty of romance, great music and stunning dance sequences. What more could you want?

This one boasts music by George Gershwin. Gershwin of course was a composer who tried to straddle the worlds of popular music and symphonic concert-hall music, combining jazz with the influence of avant-garde composers like Debussy. This didn’t prevent him from writing dazzlingly catchy popular music and the score is certainly one of the film’s strengths.

Fittingly, considering Gershwin’s ambitions, the storyline also involves a collision between the worlds of high art and pop culture. Astaire is Petrov, the illustrious Russian ballet dancer. In fact he’s an all-American boy named Peter P. Peters, but he is one of the supreme stars of the ballet. He has decided to get married. His chosen bride is musical comedy star Linda Keene. He’s very pleased with this proposed marriage, but there’s one slight snag. He has never actually met the lady in question.

The great Petrov is not a man to be deterred by such a trifling detail. When he does meet her, as is the usual pattern in the Astaire-Rogers films, she takes an immediate and very strong dislike to him. She dislikes him even more when she discovers that someone has started a rumour that they are already secretly married, and her annoyance grows even more extreme when she finds that he’s aboard the same ocean liner that she is, en route from France to New York.

There are the usual romantic complications. There’s a prima ballerina who is plotting to get Petrov for herself (despite the fact that she is already married to an English aristocrat). There are endless breakdowns involving Petrov’s manager (played by Edward Everett Horton), the hotel manager in New York (played by another regular in these films, Eric Blore), Linda’s manager and Linda’s fiance.

Again following the established pattern of the Fred and Ginger movies the main romantic plot is advanced almost entirely by their dance duets. Astaire preferred to dispense with actual love scenes on the grounds that their dance duets were the love scenes and he was quite correct. Their first dance together occurs in a night-club when Linda is ambushed into dancing with him but as the dance progresses she is caught up by the dance and by the chemistry between them and by the time the dance is over she has started to feel at least the beginnings of an attraction towards him.

That use of the dance duet to establish the romantic connection between the lead characters is one of the ingredients that makes these movies so magical.

The dance duets in this outing are, as usual, stunning. And again precisely according to the established formula there is a spectacular Astaire solo dance, this time with Fred dancing in rhythm to the ship’s engines.

The audio commentary on the DVD is overly chatty and not very illuminating but a couple of good points are made. The superb visual style of these films was to a very large extent the work of RKO’s brilliant production designer Van Nest Polglase. He was responsible for the look of most of the Astaire-Rogers films and in Shall We Dance his response to the emergence of Technicolor was to heighten both the blacks and the whites to give the black-and-white image a more dazzling look.

One thing that occurs to me is the Fred and Ginger movies were all about glamour but neither Fred Astaire nor Ginger Rogers could be described as being inherently glamorous or as having classic matinee idol looks. But put Fred in a top hat and tails and put Ginger in the sorts of gorgeous dresses she wears in this movie and with their natural grace and class they become glamorous. Maybe it’s an illusory glamour, but that makes it even more appealing. After all these movies are not exactly about real life (thank goodness), they take place in a glorious fantasy world where glamour can be created at will.

Shall We Dance might not be the greatest of their movies but it’s a very worthy entry in the cycle and a thoroughly enjoyable treat.
Posted by dfordoom at 1:25 AM