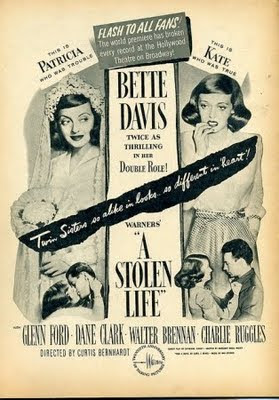 A Stolen Life, released by Warner Brothers in 1946, is not just a Bette Davis melodrama, it’s also her first film as a producer so one assumes it was a personal project. And it’s certainly ideal Bette Davis material.

Davis is Kate, a rather shy woman who spends her leisure hours painting. We will shortly find out that she has a twin sister, a sister (Patricia) who has always gained whatever whatever she wanted, often at the expense of Kate. Kate has never had the confidence to fight for what she wants.

Quite by accident, Kate has tumbled upon something that she thinks she might be able to keep for herself. This something is a man. His name is Bill (Glenn Ford), and he’s a lighthouse keeper’s assistant. He understands loneliness, and he’s kind and sensitive and really he’s the man Kate has been waiting for her whole life. But of course Patricia finds out, and wants Bill for herself.

The plot from this point on becomes increasingly and outrageously melodramatic. Patricia seems to have won, but there are many plot twists still to come. Some of the twists are obvious (such is the nature of melodrama) but there’s a major one towards the end that is both unexpected and deliciously ironic. I won’t spoil any of the fun for you.

There’s a slightly inconsequential sub-plot involving Kate’s ambitions as a painter. She meets a real artist. We know he’s a real artist because he’s rude, selfish and boorish. But of course he sees things as they really are, and understands Kate’s problems in a way that she doesn’t. She lacks confidence and a willingness to take risks, especially sexual risks.

This is the kind of role that gives Bette Davis rein. And she makes the most of it. Davis understood melodrama and she understood the type of acting it demanded, and she was happy to oblige. And she eagerly accepts the challenge of playing two roles, the good sister and the bad sister. What makes things interesting is that the good sister is the more complex and demanding role and Davis recognises this. Davis is at her outrageous best.

Glenn Ford naturally gets overshadowed but he delivers a solid enough performance. Walter Brennan is amusing as the crusty lighthouse keeper. Dane Clark is suitable obnoxious as the artist Karnock.

Having one actress play two roles has been done many times but technically A Stolen Life manages the feat remarkably effectively.

The plot is of course ludicrous but that’s hardly a problem in the world of melodrama. Just forget logic and enjoy the ride. The whole thing is gloriously overdone and over-ripe.

I saw this one on cable TV but it is available on DVD, and it’s a must for any self-respecting Bette Davis fan.
Posted by dfordoom at 6:17 PM