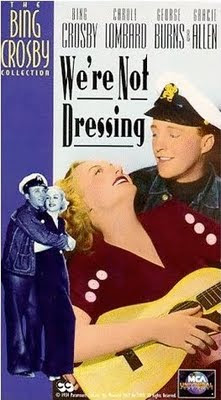 If you were trying to come up with a really dumb idea for a movie then I think this one would be hard to beat. How about a romantic pairing of Bing Crosby and Carole Lombard in a musical version of J.M. Barrie’s play The Admirable Crichton? The strangest thing is, back in 1934 Paramount actually did it, under the title We're Not Dressing.

And it works in practice just as badly as you might anticipate.

Doris Worthington (Carol Lombard) is rich heiress Doris Worthington, cruising about on her luxury yacht with her dissipated Uncle Herbert. She has two princes (in reality little more than aristocratic gigolos) both wanting to marry her, but in fact she’s consumed with lust for one of the sailors (played by Bing Crosby).

The yacht is shipwrecked and the rich passengers find themselves dependent for survival on the sailor (Crosby). But there are several major variations from Barrie’s play. The humble sailor isn’t really a humble sailor, and Doris doesn’t really need his help to survive since she’s discovered the island is not uninhabited. There are two naturalists on the island (played by George Burns and Gracie Allen) and they supply her with the necessities for survival.

Where to start with the problems that afflict this picture? The first and most obvious one is that it’s a musical but Carole Lombard doesn’t sing. That means that every time there’s a moment when you expect the female lead to join the male lead in a duet Lombard is left looking like a fifth wheel because she can’t sing. At this stage Paramount clearly did not understand that Lombard was not an all-round actress who could be cast in any kind of picture. She had a peculiarly narrow talent that only bloomed when given the right kind of material. When she was given a suitable vehicle that talent bloomed spectacularly and delightfully, but this was most emphatically not the right vehicle.

Secondly, while Crosby and Lombard are quite good together when they’re just indulging in verbal sparring there is zero sexual chemistry between them. And Lombard was always at her best when there was a real spark between her and her leading man.

Thirdly, George Burns and Gracie Allen have been added for extra comic relief but they’re the most unfunny and most annoying comedy team in cinema history. When they’re onscreen the movie becomes almost unendurable. It’s a measure of just how irritating they are that Ethel Merman (as a gold digger hoping to snare rich Uncle Hubert) seems quite innocuous by comparison.

There’s also a pet bear who follows Bing Crosby about he’s still not enough to save this picture.

Cecil B. DeMille had made a terrific silent adaptation of Barrie’s play in 1919 with Gloria Swanson as the female lead, under the title Male and Female . DeMille’s film has all the wit and lightness of touch that We're Not Dressing so conspicuously lacks. The basic idea calls for a sophisticated comedic approach which is precisely what DeMille delivers in his movie and is precisely what We're Not Dressing fails to deliver.

There are occasional good moments and Lombard shows flashes of her special magic but the whole project is so ill-conceived that her best efforts are doomed to failure.

This is a pre-code movie and there’s some pre-code naughtiness, notably involving Carole Lombard’s underwear and a scene where Bing Crosby in a fit of sexual frustration and anger resorts to handcuffing Lombard to the wall of her hut, but somehow it still manages to fall rather flat. Mind you, the biggest problem I had was with George Burns and Gracie Allen who managed to ruin any enjoyment I might have got out of this picture. That may of course be merely a matter of personal taste.

The good news is that it’s a fairly short movie but this may well be the longest 74 minutes of your life.

It is at least different, and it's an interesting oddity.

The other good news is that the movie is included in the Carole Lombard Glamour Collection which includes some truly superb movies that make it a must-buy DVD set so you can regard We're Not Dressing as a bizarre bonus.
Posted by dfordoom at 5:10 PM