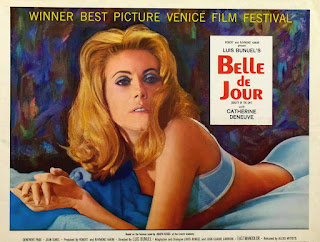 Luis Buñuel, born in Spain, was the most notable of all surrealist film directors. Belle de Jour, released in 1967, is his most famous (and most commercially successful) movie.
Right from the start Buñuel has us wondering what on earth is going on and where this is all going to lead. We see a young couple in a carriage. The wife says something to upset the husband so he has her tied to a tree and flogged and then tells the coachman that he can do what he likes to her.

Then suddenly we see the young couple in bed together. The opening sequence was apparently just one of her sexual fantasies. OK, some people do have crazy sexual fantasies, there’s nothing startling in that idea. Then the wife seems to be getting amorous, but then she refuses to sleep with her husband. This girl obviously has a few sexual issues.

The woman is Séverine (Cathereine Deneuve). Her husband is Pierre (Jean Sorel, a successful surgeon. He obviously realises that she has some issues and he’s very patient with her. 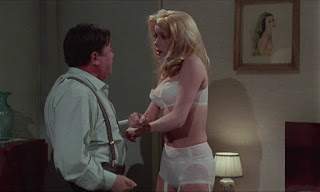 Séverine decides to get herself a part-time job, working in an up-market brothel. She will only work afternoons so she is given the professional name Belle de Jour (Beauty of the Day). She’s nervous at first, especially when she discovers that some of her clients have certain kinks.

Working at the brothel introduces her to a street thug named Marcel, and her relationship with him is complex. It all leads to a dramatic conclusion.

Or does it? How sure can we be that any of this is real? Buñuel throws in fantasy sequences and flashbacks with no indication at all that suddenly we’re seeing one of Séverine’s fantasies or a scene from her memories. Of course her memories may or may not be true - they may be fantasies as well. We’re really not sure how much of this movie is real. Buñuel puts us into a constant state of uncertainty. There are really only two scenes which can be absolutely sure are fantasies. There are other scenes which leave us in a state of total uncertainty. We’re dealing with both the conscious and the unconscious and the unconscious may not necessarily be less real than the conscious. 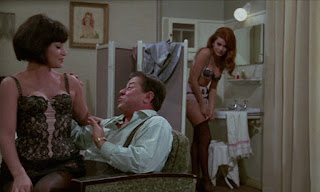 Catherine Deneuve has always been good at playing odd and/or disturbing women. It’s something she does with a lot of subtlety. She doesn’t resort to histrionics, she just manages to make us feel very unsettled.

While some viewers might be tempted to read political meanings into this film I don’t think it’s a political film at all. The movie’s takes on all issues are too complex for straightforward political interpretations. Buñuel had been very left-wing in his youth but seems to have become politically ambivalent and even disinterested as he got older. This is certainly not an anti-feminist film and there’s not a trace of misogyny here but at the same time you’d have trouble seeing it as a straightforward feminist film. I think it’s futile enough to view it as a political film in a 1967 context and even more futile to try to analyse it through the lens of 21st century political obsessions.

Buñuel has some fun at the expense of the bourgeoisie but the bourgeois characters are not shown as being evil. Séverine is very bourgeois but she’s basically a sympathetic heroine. Pierre is even more bourgeois and he’s a really nice guy. Husson seems sinister at first but actually he’s ambiguous. And the nastiest character in the movie is the working-class thug Marcel. Buñuel was interested in religion but his attitude towards Catholicism (he was raised by the Jesuits) seems ambivalent. It’s not an angry movie (as all political movies are). It’s playful and amused. 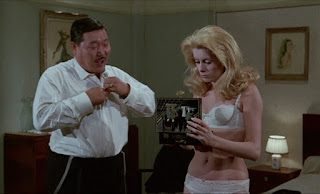 It’s also not a morality play. Séverine has some sexual kinks but I don’t think the movie is telling us that she needs to give them up. Maybe she just needs to accept her nature. Séverine feels shame and guilt about being a prostitute but the movie actually doesn’t suggest there’s anything wrong with prostitution. Madame Anaïs’s brothel is a very pleasant place to work. The two most psychologically healthy characters in the movie are the two whores Mathilde and Charlotte. They’re cheerful, likeable and generally rather sweet. Madame Anaïs hires girls who enjoy their work and we get the impression that Mathilde and Charlotte really do enjoy their profession.

We also get the impression that working in a brothel is actually good for Séverine. She seems to be more relaxed, more in touch with her emotions and she even starts to thaw sexually.

Pierre’s friend Husson has chosen a life of immorality. He feels shame and remorse, and that makes his immorality much more pleasurable. For Husson it’s a formula that works. 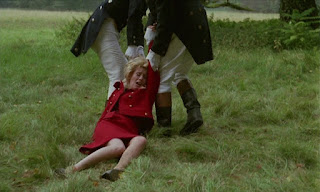 Buñuel’s view of sadomasochism is also surprisingly nuanced. Séverine’s second customer is a masochist. He enjoys being beaten and humiliated by Charlotte, but he also insists on being in absolute control of the sexual encounter with her. Buñuel understands, as most people don’t, that in this case the masochistic partner actually calls the shots. This seems to apply to Séverine as well. She enjoys the idea of being dominated and whipped but in a relationship she wants to keep total control. When she encounters the thuggish Marcel she is clearly very sexually excited by him but she resists all his efforts to take control.

Belle de Jour is subtle surrealism. We don’t really know where the realism stops and the surrealism begins, or whether there’s any reality at all in the movie.

Belle de Jour is the kind of movie that you watch once and you think you’ve figured out what’s going on, then you watch it again and you decide that you have to rethink your interpretation completely. A fascinating brilliant movie, very highly recommended.