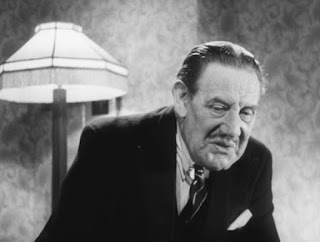 King of the Underworld is a low budget 1952 British Tod Slaughter crime melodrama and for me that’s reason enough to watch the film. Tod Slaughter started his career on the stage in 1905 playing actual stage melodrama villains. He made a series of excellent horror-tinged film melodramas in the 1930s and his performances are as close as you’re ever going to get to seeing a genuine moustache-twirling Victorian melodrama villain on the screen. Tod Slaughter was the real deal.

King of the Underworld is a kind of blending of the 1930s Tod Slaughter melodramas with the typical 1950s British crime thriller. Tod Slaughter’s performance is as outrageous and over-ripe as ever, there’s some classic melodrama mood music but it has a contemporary setting and it’s a private eye thriller. But it really has nothing in common with other British crime films of its era. 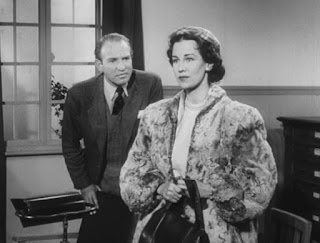 Terence Reilly (Tod Slaughter) is a master blackmailer. His latest victim, Lady Sylvia Gray, has just tried to kill herself. Inspector Morley (Patrick Barr) has been trying for twenty years to put Reilly behind bars, since the day that Reilly murdered a young police constable. Reilly has given up murder these days, blackmail being safer and more profitable. Morley tries to convince Lady Sylvia to press charges but she is terrified that the letters Reilly has in his possession could destroy her husband’s diplomatic career. There is nothing Inspector Morley can do. As a policeman his hands are tied.

But now Morley is no longer a policeman. He’s quit and gone into business as a private enquiry agent (what Americans would call a private detective). Now he no longer has to worry quite so much about legal procedures. It isn’t specifically stated but it’s a fair assumption that his decision to retire from Scotland Yard was partly motivated by his desire to pursue his vendetta against Reilly. 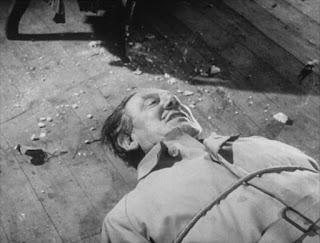 Morley has a rather useful assistant in the person of Eileen (Tucker McGuire), also an ex-copper and a very resourceful lady.

Morley hatches a plot to trap Reilly but Reilly is a very slippery customer. And Reilly is as vengeful in his way as Morley. Both men are determined to destroy the other.

Reilly is involved in other business ventures besides blackmail. Such as kidnapping. He kidnaps a young woman named Susan. The price of her release will be an emerald, an emerald obtained in India (in a manner that was technically legal but perhaps morally dubious) by her uncle. Kidnapping seems to be a popular sideline for Reilly since he also kidnaps an eccentric scientist. 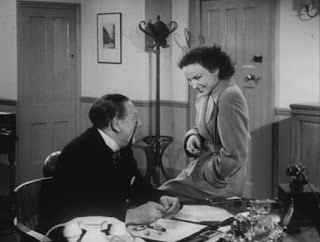 The plot is oddly episodic. There are three separate crimes and three separate investigations, with Reilly being the only common link. The first two investigations are inconclusive, in a way that might have perplexed audiences. The explanation is apparently that the movie is three episodes of a short-lived TV series cobbled together (which may also be the case for another Tod Slaughter movie released at this time, Murder at Scotland Yard).

There are touches in this movie, such as the use of disguise, that would have seemed very Victorian to a 1950s audience. And the scientist kidnapped by Reilly was working on a secret formula which could have implications for world peace. This movie really does seem very anachronistic for 1952 and Tod Slaughter’s performance is very anachronistic also. But that’s exactly what makes it so appealing. There was simply no-one else in the movie world like him. He was a total original. He may have been the hammiest actor who ever lived but it’s enormous fun to see him in full flight.

Director Victor M. Gover had a very very obscure career. He gives no indication of having any great talent but he lets Slaughter do his thing unhindered and that’s what counts. 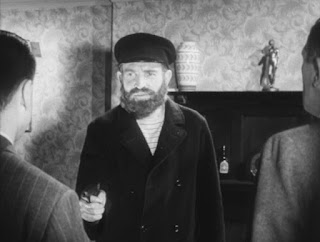 This movie is a real obscurity but it’s readily available on DVD, being one of the nine feature films in the Renown Pictures Crime Collection Volume 1 boxed set. The transfer is a bit rough around the edges at times but on the whole it’s pretty good and perfectly watchable. The sound quality is a bit iffy at times but there’s never any problem following the dialogue.

King of the Underworld is also a real oddity. The only reason to watch it is its extraordinary star but that’s reason enough. If you enjoy melodrama and hammy acting then it’s highly recommended. If you prefer a realistic approach you’ll hate it.

I strongly urge you to check out Tod Slaughter’s gothic melodramas such as Sweeney Todd: The Demon Barber of Fleet Street (1936), Maria Marten, or The Murder in the Red Barn (1935) and Never Too Late To Mend (1937).