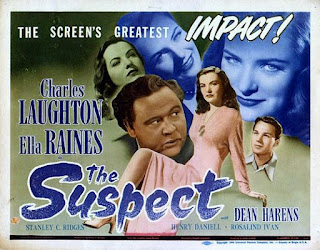 The Suspect is a romantic/crime melodrama with film noir overtones directed by Robert Siodmak for Universal in 1944.

It is London in 1902. Philip (Charles Laughton) is a middle-aged man who runs a very exclusive tobacconist’s shop. It’s actually a very sizeable concern catering to the gentry and Charles is decidedly prosperous. He’s also very unhappily married. His wife Cora has made his life and their son’s life a misery. There is no love in Philip’s life.

Then a very pretty young lady named Mary (Ella Raines) walks into his shop looking for a job. He has no job to offer her but shortly afterwards he passes her in the street. She is crying. We have already seen evidence that Philip is in fact a genuinely very kind man. He’s not the sort of man who can remain unmoved by a woman’s tears. He decides, correctly, that she has a problem that she needs to talk about. He takes her for a meal.

Pretty soon Philip and Mary are seeing each other regularly. They might seem mismatched but Philip is charming and gentle and Mary is a delightful and very sweet young woman. Their relationship is entirely innocent. They’re just two lonely people who find comfort in each other’s company. Of course their relationship might not seem so innocent to others.

And it’s fairly clear that love is starting to bloom. They really are perfectly suited and could very easily make each other very happy. In other circumstances it’s clear they would soon marry. But Philip is already married. And there is no way his wife is going to give him a divorce. In fact if she finds out about Mary there won’t be any point in trying to explain to her that the relationship is really quite innocent. Cora will do her best to destroy her husband and the girl he loves. And of course the relationship between Philip and Mary really is more than friendship. 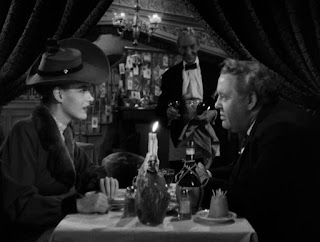 If only Philip didn’t have a wife.

I think you can guess what’s going to happen next but it’s left just a little ambiguous. Maybe his wife’s fatal accident really was an accident. We cannot be entirely sure.

The coroner’s jury brings in a verdict of accidental death. Inspector Huxley is not entirely satisfied. There’s no evidence at all to suggest murder but policemen have very suspicious minds.

The circumstances are sufficiently ambiguous to leave Philip open to blackmail, and when you’re vulnerable to blackmail then you can be pretty sure that a blackmailer will arrive on the scene. 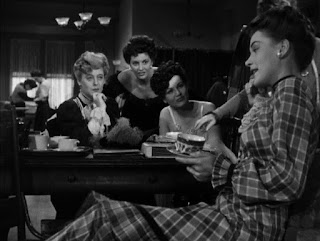 Obviously there’s nothing startlingly original about the plot. It’s one of those cases in which the thing that matters is how well a rather hackneyed idea can be executed. Robert Siodmak can of course be relied upon to execute it very well indeed. This is the sort of thing at which he excelled.

Much also depends on the acting. Charles Laughton is superb. He makes Philip a very sympathetic character indeed. Philip is a truly kind man. When he says that he has never had any desire to hurt anyone we know he is telling the truth. And yet he may have killed his wife. And while Philip appears to be gentle and passive we get the feeling that there is more to him than that. He’s the sort of man who might well stop being passive if backed into a corner, or if he felt that the woman he loved might be in danger. There’s the suggestion of a strong will deeply hidden. Philip is kind and gentle because he’s always been able to be kind and gentle. That doesn’t mean he is as weak as he appears to be. Laughton gets the chance here to show that he can give a great performance that is also extremely low-key and subtle. 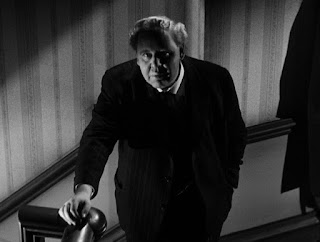 Ella Raines is delightful as well. Mary starts out being vulnerable and perhaps just a bit mousy but when she finds love the real Mary appears - a bright, vivacious high-spirited young woman.

Charles Laughton and Ella Raines seem an unlikely romantic pairing and it’s essential to the film’s success that we buy the idea that these two really are head-over-heels in love. And we do buy it, largely because Ella Raines does such a fine job of conveying to us what it is that motivates Mary. She is not just a woman who craves love. She desperately craves kindness and understanding. If a man shows her that kindness and understanding she is going to fall for him, even if he’s middle-aged, overweight and not good-looking. It’s also highly likely that she sees him as a father figure - a man she can trust and rely on completely. We really do believe that this is the sort of man she wants and needs. And Philip undeniably has charm as well.

Special mention must be made of Henry Daniell’s delicious performance as the blackmailer. 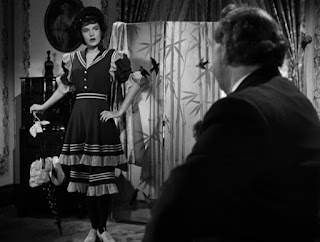 Is it film noir? Does it fit into the period noir sub-genre? I think you can make a fairly strong case that it does. It certainly has plenty of noir visual style. Being a Universal production you could even argue that the visual style is gothic noir.

Kino Lorber’s DVD (they’ve released it on Blu-Ray as well) looks great and there’s an audio commentary by Troy Howarth.

A good tight script, excellent performances especially from Charles Laughton and Ella Raines, stylish direction by Siodmak and lots of shadows and moody black-and-white cinematography - it all adds up to a very very satisfying movie indeed. Highly recommended.
Posted by dfordoom at 5:46 PM