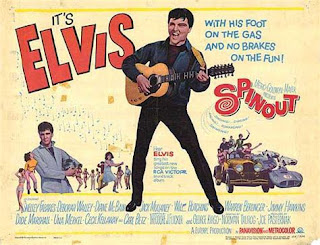 Spinout, released in 1966, isn’t one of Elvis Presley’s most highly regarded movies and it is pretty lightweight. But lightweight isn’t necessarily bad, as we will see.

Mike McCoy (Elvis) races cars and sings rock’n’roll and does both fairly successfully. His life starts to get complicated when a beautiful girl causes him to run off the road. Then rich businessman Howard Foxhugh (Carl Betz) starts to use his money and influence to try to force Mike to do things he doesn’t want to do. Fitzhugh wants him to drive his new racing car and he wants him to sing at his daughter Cynthia’s birthday party.

Now it’s not that Mike has any real objection to driving new racing cars and singing for girls on their birthdays. But Mike is a free spirit. He only does things when he wants to do them. He hates being pushed around. He’s terrified of the prospect of living a conventional life and accepting responsibility. He’s particularly terrified of the idea of marriage.

There’s obviously going to be a battle of will between Mike and Fitzhugh and Fitzhugh’s daughter Cynthia is going to be involved as well. Cynthia by the way was the girl who caused him to crash his car.

Cynthia Foxhugh and Diana St Clair are not the only women making his life complicated. His cute but ditzy girl drummer Les (Deborah Walley) is hopelessly in love with him.

Fitzhugh and his daughter come up with all sorts of schemes to manipulate Mike. The romantic complications escalate. And there’s the big road race coming up.

There’s nothing more than that to the plot but the script has plenty of zing.

This is very much a feelgood movie. It has lots of songs (which are mostly quite good), it has cars, it has girls. Lots and lots of girls. There’s a bit of race car action, there’s romance and there’s humour. This is a genuinely funny movie and it’s funny in a way that is both witty and good-natured. The characters are a fine collection of eccentrics, and they’re likeable. Even Fitzhugh, who at first seems like he might be a villain, turns out to be a pretty nice guy.

The acting is excellent. The three main female characters, all determined to marry Mike, are all totally different women with sharply defined personalities which gives the actresses (Shelley Fabares as Cynthia, Diane McBain as Diana St Clair and Deborah Walley as Les) something to work with and they make the most of it. The supporting cast is good.

Elvis is in fine form, breezing through the picture with effortless charm and charisma and with a good script to help him he manages to be quite amusing.

Norman Taurog directed no less than nine of Elvis’s films and in this one he keeps things brisk and snappy. Theodore J. Flicker and George Kirgo wrote the screenplay. A year later Flicker would write and direct the superlative spy spoof/satire The President’s Analyst.

The Warner Brothers Region 4 DVD offers an excellent anamorphic transfer. There are no extras.

Spinout might be lightweight but it has every ingredient you could ask for in a light-hearted Elvis Presley romantic comedy, and every one of those ingredients works. It’s a must-see for Elvis fans and even if you’re not particularly an Elvis fan you might well find yourself thoroughly enjoying this picture. Maybe it’s not quite as good as Viva Las Vegas but it’s still very very good. Highly recommended.
Posted by dfordoom at 10:27 PM