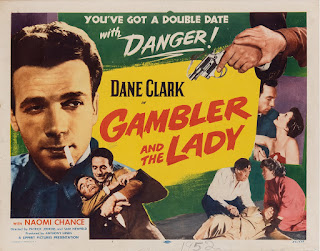 The Gambler and the Lady is another solid Hammer film noir from the early 50s, in this case 1952. It’s by no means a great movie but it’s entertaining and that’s what Hammer were aiming for.

This is one of three movies that American actor Dane Clark made for Hammer at around that time and he proved himself to be a reliable performer for the company. American Sam Newfield helmed the picture although due to British quotas he had to share the directing credit with British director Patrick Jenkins. 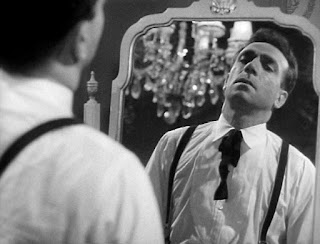 Dane Clark plays Jim Forster, an American gambler who runs a successful nightclub in London but makes his real money from his illegal gambling operations. Forster had served three years for manslaughter in the US after killing a man in a drunken rage, which is why he no longer drinks. He sounds like a tough guy, and he is, but he’s also a pretty nice guy as well. He runs a civilised gambling operation - when one of his employees roughs up a guest for welshing on a gambling debt Jim fires the employee (with fateful consequences).

What Jim really wants is to be accepted by the British upper classes. He’s a keen, indeed fanatical, Anglophile and he works very hard at it. He even employs a retired English school teacher to teach him which knife and fork to use. Unfortunately he’s still an American  street kid from the wrong side of town and no matter how hard he works at it he’s never going to make it. That’s his tragedy and that’s the weakness that will threaten him with destruction. The irony is that he’s already rich and successful and if he could just learn to accept himself he could be perfectly happy. 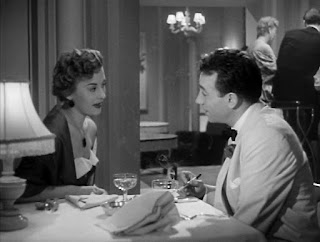 Jim has two other problems. The first is his girlfriend Pat (Kathleen Byron). She’s a dancer but she’s possessive and he really wants an upper class girlfriend and he wants out of the relationship. This is not entirely selfishness on his part - Pat’s possessiveness is pathological, as we will soon see.

His other problem is the Colonna brothers, Arturo (Eric Pohlmann) and Angelo (Enzo Coticchia). They’re big-time gambling operators from the States and they want to take over gambling in London. Jim Forster is technically a criminal but he’s no hoodlum. The Colonna brothers are a whole different kettle of fish. They’re vicious and ruthless and violent. 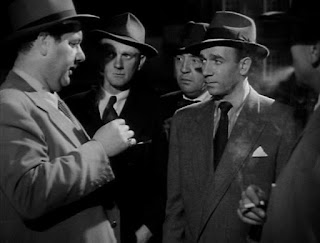 Then Jim meets Lady Susan Willens (Naomi Chance). While the other upper class acquaintances he meets treat him with contempt and amusement and as little more than a bad joke, Lady Susan is different. She likes Jim. He’s a refreshing change from the effete young men she usually mixes with. Jim is exciting and masculine. When he offers to take her to a boxing match she is thrilled. All that testosterone! But juggling the Colonna brothers, Pat and Lady Susan will bring Jim Forster to the edge of destruction, aided by the fatal weakness that all good noir heroes should have - his unfortunate and ill-advised attempts at social climbing.

Dane Clark is excellent in a role which could have been unfortunately comic. He makes Jim’s aspirations seem touching rather than pathetic. He does the tough guy with a sensitive streak thing quite adequately and he makes a sympathetic hero. Eric Pohlmann makes a fine heavy while Kathleen Byron is suitable shrewish in the femme fatale role, although in fact it’s the nice girl (Lady Susan) who proves to be just as dangerous to Forster as the femme fatale. Naomi Chance is reasonably good and Meredith Edwards is fun as Jim’s perpetually drunken but shrewd right-hand man. 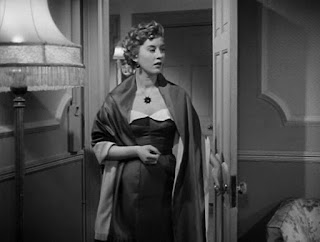 The VCI-Kit Parker films DVD is a double-header including this movie and Heat Wave. As with all their Hammer Noir releases the transfer is very good and it represents outstanding value for money.

This is typical Hammer film noir - a thoroughly enjoyable little B-movie with no aspirations to be anything else. Recommended.
Posted by dfordoom at 10:31 AM