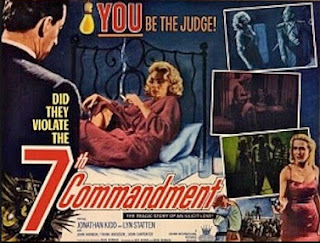 The Seventh Commandment is included in Something Weird’s Weird Noir DVD boxed set, and weird this one most certainly is.

Ted Mathews (Jonathan Kidd) has just graduated from business college and he sets off with his girlfriend Terry (Lyn Statten) to celebrate. They are involved in a collision with another car. Ted is relatively unhurt and is relieved to find that Terry has survived as well, but when he goes to take a look at the other car it’s obvious that the other driver hasn’t fared so well. Ted takes one look at him and realises he’s dead. He returns to his own car to find that Terry is dead as well. At this point Ted’s head starts to spin and he suddenly develops amnesia. He wanders away from the scene of the accident and goes to sleep under a tree. The next day he is found by a travelling revivalist preacher, the Reverend Noah Turnbull (Frank Arvidson). Noah assures him that when God wants him to remember his previous life he will. They join together in prayer and Ted undergoes a sudden conversion.

Noah tries to help him to at least remember his name and suggests several possibilities based on the initial T. M. engraved on his watch. The Christian name Tad seems to ring a bell, as does the surname Morgan. So now Ted Mathews becomes Tad Morgan. 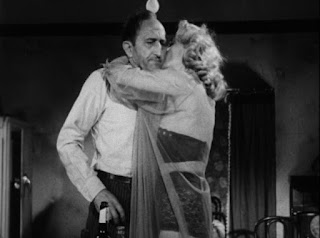 Within a fairly short space of time he is the Reverend Tad Morgan, a spectacularly successful revivalist preacher. Noah is now his assistant. Tad is an inspiring speaker and his healing services are remarkably successful. Tad seems to be well and truly imbued with the Holy Spirit. He builds up a huge following, and the money comes pouring in.

Everything is going great and Tad is happy and fulfilled. Until the day he recognises a familiar face among his congregation - Terry’s face. Terry is not dead at all, but life has not been kind to her since the accident. The police assumed she was the driver and she was sent to prison for drunk driving. She is now an alcoholic loser and she’s shacked up with Pete (John Harmon). Pete is not just an alcoholic loser, he’s violent as well. They make a perfect couple. Pete rolls drunks in order to finance their drinking binges. 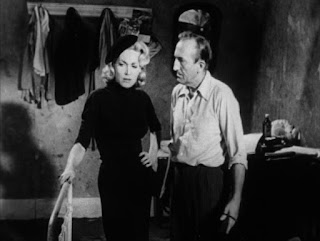 And then Terry sees Ted Mathews’ picture in the newspaper and discovers that not only is he now the Reverend Tad Morgan, he is also rich. This gives Terry an idea - she can blackmail Tad. Which she does. She not only threatens Tad with exposure, she also neglects to tell him one very important fact relating to the accident, a fact that will give the subsequent events of the movie a tragically ironic twist.

Terry and Pete run through the thousand dollars in blackmail money very quickly, and then Terry gets an even better inspiration. Why blackmail Tad for money, when she could blackmail him into marrying her? Then she and Pete would have enough money to stay drunk for the rest of their lives. 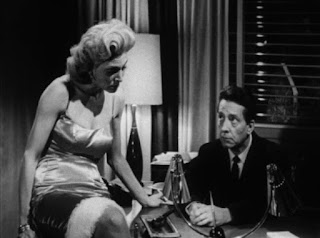 Terry forces Tad to meet with her, and at this point Tad succumbs to evil temptations. He is soon on the road to ruin but there are still some important plot twists left to go.

This very low budget movie was directed by Irvin Berwick from a screenplay by Berwick and Jack Kevan. If you haven’t heard of these people I’m not surprised. Their film careers were less than distinguished and certainly The Seventh Commandment is no cinematic masterpiece. Berwick’s directing style isn’t going to sweep you off your feet. On the other hand this is an interesting movie, combining a rather clichéd idea (amnesia) with a more unusual religious theme. This may in fact be the most obvious example of the very rare sub-genre of religious noir. Redemption is certainly a concept that is not uncommon in films noirs, but spiritual salvation is pretty rare. Fritz Lang’s You Only Live Once and John Boulting’s Brighton Rock are the only other noirs I can think of that confront such issues, being respectively the products of a Catholic director and a Catholic writer. It’s a movie that could have played out as merely a combination of film noir and exploitation movie but The Seventh Commandment does appear to take its religious themes seriously. 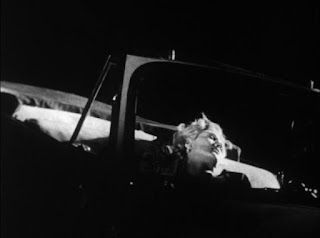 The acting is not as bad as you’d expect in an early 60s low-budget movie. Lyn Statten pulls out all the stops in making Terry one of the most vicious of femmes fatales and at the same time one of the most pathetic. She’s not a great actress but she’s giving it all she’s got. And Jonathan Kidd as Tad/Ted does project a certain presence, enough to make him fairly convincing as a charismatic preacher. John Harmon projects an extraordinary degree of sheer spiteful malice. The performances might be on the cartoonish side but they’re effective enough.

Something Weird’s DVD transfer is as good as you could expect given the extreme obscurity of the movie and the likelihood that the original negative is long since lost.

If you like your noir with a touch of weirdness then The Seventh Commandment is worth a look.
Posted by dfordoom at 8:19 PM