On the surface Samuel Fuller’s 1961 gangster film Underworld USA is fairly conventional for a Sam Fuller movie. It’s much less bizarre and over-the-top than Forty Guns (1957) or Shock Corridor (1963) or The Naked Kiss (1964). But once you start looking carefully you can see that in its own much more subtle way it is, like all of Sam Fuller’s movies, very individual and quite unlike the usual run of Hollywood gangster movies, or Hollywood movies in general.

The difference lies not in the plot, which is a relatively straightforward revenge plot. The difference is in the style, and in the mood.

The style is very stripped down and direct. Fuller believed movies should be direct and forceful, and this one certainly qualifies. It’s not that it’s particularly violent, it’s more that the violence comes through not just in the action but in the cutting, in the way Fuller composes his shots, in the way that the violence just hits you when you’re not expecting it.

The mood is intense and obsessive to an extreme. In some ways it’s more like a revenge western than a revenge crime film, in the sense that this is a movie about a man who has absolutely nothing in him except for the thirst for revenge. 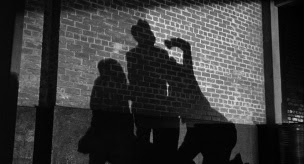 When the movie opens Tolly Devlin is a 14-year-old juvenile delinquent. In theory he’s being brought up by his father; in practice he’s being raised by Sandy (Beatrice Kay). Sandy runs a bar. She’s what could best be described as a rough diamond. She’s outwardly tough and world-weary but inside she’s as sentimental as they come and she loves Tolly as if he were her own son.

Then comes the crucial moment in Tolly’s life. He and Sandy see a man being beaten to death in an alleyway behind Sandy’s bar. We don’t actually see this event - all we see are shadows on a wall, and we assume that’s what Sandy and Tolly see. After it’s over they discover that the man being beaten was Tolly’s father, and that he’s dead. At that point Tolly makes the decision to devote the rest of his life to avenging his father. The irony of course is that Tolly’s father was a worthless two-bit hoodlum, but to Tolly he was a god. 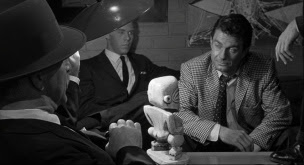 Tolly has one clue - he recognised one of the men who killed his father. We then jump forward more than a decade. Tolly is now a burglar, and not a very successful one since he’s about to go inside for the third time in his comparatively short life. And now fate gives him what he wanted. The man he recognised as one of his father’s killers is an inmate in the same prison, dying of congestive heart failure. Before he dies Tolly tricks him into revealing the names of his three accomplices.

By the time Tolly is released these three men are now very big wheels indeed in organised crime. In fact there is only one man senior to them in the whole Syndicate hierarchy. They control the three most important criminal activities in the Syndicate’s operations - Gela controls narcotics, Gunther controls the labour unions and Smith runs prostitution. Of course there is no way that a small-time burglar like Tolly could ever get anywhere near such titans of organised crime, but this is where the movie also resembles a western - the hero seeking revenge wants to get the men who killed his father and fate arranges it so that he finds himself in a position to do so. By the standards of a normal crime movie it’s completely absurd that Tolly could get close to these three men within a very short space of time, but this is a Sam Fuller movie so logic is much less important than that the plot should allow Tolly his chance. 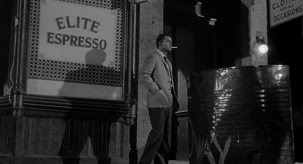 In the course of tracking these killers he rescues a female hooker and junkie from a cold-blooded hitman named Gus (Richard Rust) who was about to kill her. He and Sandy more or less adopt the woman, who goes by the name of Cuddles (Dolores Dorn). She is another element in the movie that makes me think of this movie as a western, with the hardbitten hero adopting an orphan kid except that in this case she’s a good-natured whore.

Cliff Robertson plays Tolly as an adult and he brings just the right touch of intense obsession. It’s exactly the sort of performance Fuller would have wanted and it works. Richard Rust almost steals the picture as one of the most chilling hitmen in movie history. He’s the sort of one-dimensional obsessive vicious killer that you’d expect to find as the evil gunslinger in a western. He has no personality, he simply exists to kill, but somehow Rust makes this character very memorable indeed. 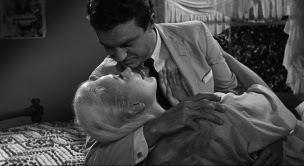 Not one of the characters has any depth. They are not people so much as representations of particular ideas or states of mind. Fuller could quite easily have dispensed with giving the characters names and just called Tolly the Avenger, Gus the Killer, Cuddles the Girl and the crimes bosses Crime Boss #1, Crime Boss #2, etc. In an ordinary movie this one-dimensionality of characterisation would have been a serious weakness but it would have worked well in a spaghetti western (think Clint Eastwood as The Man With No Name) and it works for Fuller. It works for Fuller because he’s not interested in giving us characterisation - he wants each character to simply represent one single idea.

In his introduction to the DVD Martin Scorcese compares this movie to the movies of the French New Wave, and there is perhaps something in that. It does have the kind of minimalist staccato feel of very early Godard and it’s not altogether surprising that Godard admired Fuller so much. 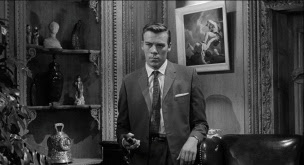 This is the sort of movie where you could more or less ignore the plot and just enjoy the style. Scorcese makes the claim that Fuller’s movies were becoming almost abstract at this time, and it’s a valid point.

Underworld USA forms part of Columbia’s Samuel Fuller Collection and is perhaps the strongest movie in that set, certainly vastly superior to the bitterly disappointing The Crimson Kimono. The transfer is 16x9 enhanced and is superb. Scorcese’s brief but excellent introduction is the only extra included.

Underworld USA is a must-see for Sam Fuller fans.
Posted by dfordoom at 1:21 PM