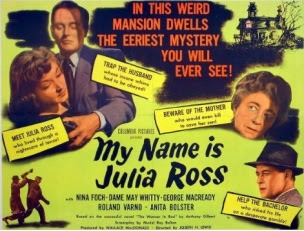 The Columbia Film Noir Classic III boxed set includes five movies. The first of these movies is Joseph H. Lewis’s My Name is Julia Ross, made in 1945. I haven’t the faintest idea why this movie has ever been considered to  be a film noir. These isn’t a single element of film noir present in the movie. My Name is Julia Ross is a gothic melodrama, and it’s a very good one.

This movie has much more in common with other gothic melodramas of the 1940s, such as Dragonwyck, Gaslight and Hitchcock’s Rebecca. Unfortunately film noir is very fashionable and very marketable, while gothic melodrama is not. Melodrama remains a despised genre, for no good reason.

Like other directors of the period Lewis made movies in the style that seemed to suit the material. The script for My Name is Julia Ross was clearly in the established genre of gothic melodrama, and Lewis showed himself to be perfectly adept in using the required style. 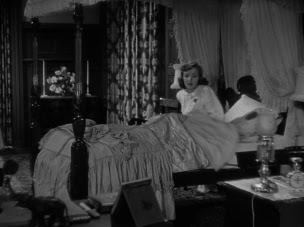 Julia Ross (Nina Foch) is desperate for a job. She accepts a position as secretary to an elderly lady in London but she gets more than she bargained for. After accepting an innocent cup of tea she wakes up 48 hours later in a very gothic house in Cornwall to find that everybody calls her Mrs Hughes. She is apparently married to Ralph Hughes (George Macready), which seems rather strange to her since she’s never met the man.

She finds herself imprisoned in this remote house and since all the villagers have been told that Mrs Hughes is mad nobody will believe her story. The old lady (played by Dame May Whitty) seems kind enough but clearly she is involved in this strange plot. And Ralph Hughes is very worrying indeed. He is obviously mad, and violently so. Julia has the strong feeling that these people mean her no ghood at all, and she’s right. 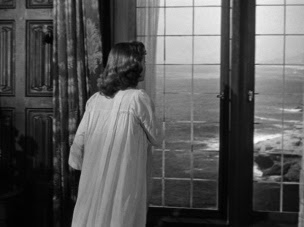 If only she could get a message to her boyfriend, Dennis Bruce (Ronald Varno). But even getting a letter out of this house seems as impossible as escape. And escape, as she soon finds out, is very definitely impossible.

Thanks to the household cat she finds a secret passageway, and there she learns what her fate will be. Ralph has murdered his real wife by hurling into the sea and now he and his mother need a substitute wife they can bury. Julia is to be murdered as well. And there seems to be no way she can avoid this fate. 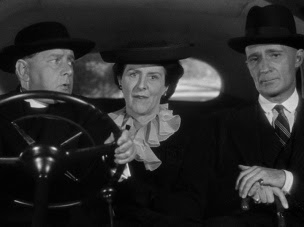 Nina Foch is very good as the heroine. Dame May Whitty gives a marvelously devious performance as the deranged mother while George Macready is all menace as Ralph Hughes. Ralph is a time-bomb just waiting to go off.

Lewis demonstrates a complete mastery of the gothic style. He was given twelve days to complete the picture and rapidly fell behind schedule. He was offered a bonus, a bonus he desperately needed since he was broke, if he could bring the picture in on time. Instead he informed the studio that he expected to fall even further behind schedule, which he did. He was in big trouble until the movie was sneak-previewed. The sneak preview convinced Columbia that they had a surprise hit on their hands (which proved to be the case) and Harry Cohn gave instructions that in future Lewis was to be allowed to make pictures his way. 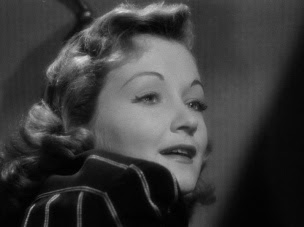 The DVD transfer is a very handsome one and does full justice to Lewis’s stylish direction. The DVD includes a few extras.

If you enjoy the gothic melodrama genre then you should find My Name is Julia Ross to be very satisfactory entertainment indeed. It has all the gothic trappings anyone could wish for. Highly recommended.
Posted by dfordoom at 9:25 PM