If you’re only familiar with Mickey Rooney from the Andy Hardy movies or his 1940s musicals then his 1950s movies in the film noir style will come as quite a surprise. These types of movies really brought out the best in him and Drive a Crooked Road, made at Columbia in 1954, is one of the finest he made.

Rooney is Eddie Shannon, a gifted mechanic who is also a promising racing car driver. He dreams of going to Europe to race in the big time at places like Le Mans. He also dreams of finding love. When he meets Barbara Mathews (Dianne Foster) he thinks he has a shot of achieving both his dreams but his fantasy is destined to be shattered.

Barbara is setting him up for her boyfriend Steve. Steve (Kevin McCarthy) and his pal Harold (Jack Kelly) are planning a bank robbery and they need a getaway driver. And this driver has to be very very good. Someone who is a racing car driver would ideal. So they hatch a plan to make Eddie think Barbara is in love with him in order to get him involved.

This movie is a bit of a slow burner but that proves to an asset. We get plenty of time to get to know (and to like) Eddie. He’s a nice guy who just happens to be very innocent where women are concerned. It’s amusing to see the eight-times married Rooney playing someone who knows nothing about women! Rooney doesn’t just fall for Barbara, he falls for her in a very big way indeed. 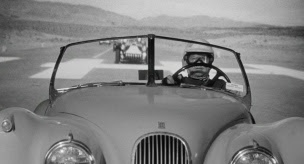 Barbara is of course the femme fatale here, but she’s not quite the completely evil spider woman. She does have a conscience although it’s sleeping most of the time. She doesn’t really want to hurt Eddie but of course she will. And she will discover that what seemed like easy work, suckering Eddie into a crime he never wanted any part of, will have a high price, and not just for Eddie.

There are some thrilling driving scenes as Eddie (who of course allows himself to be persuaded to participate in the bank robbery) drives the getaway car at very high speed over an extremely bad and treacherous road. 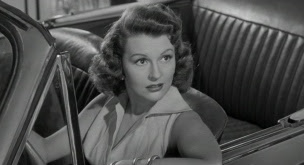 Director Richard Quine does a fine job. He doesn’t show us the actual robbery at all - it’s Eddie’s part in the crime that he wants to keep the focus on and it’s a smart movie. Blake Edwards wrote the screenplay. Although better known for his comedies Edwards did quite a bit of work on crime stories for both movies and television early in his career and his screenplay is taut and exciting as well as emotionally effective.

Rooney gives one of his best and most moving performances in this movie. He’s utterly convincing and always in control of his performance, never overplaying but always able to bring out the emotional pain that Eddie feels. Dianne Foster is an effective femme fatale. 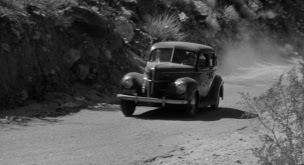 Kevin McCarthy and Jack Kelly are very smooth villains, especially McCarthy. Steve is a charming and likeable guy but the menace is there under the surface. The menace is closer to the surface in Kelly’s performance. They are genuinely frightening villains because they seem so much like regular guys - not at all the stereotypical movie hoodlums. Sometimes evil looks very innocent indeed.

This is classic film noir with a decent guy slowly drawn into a web of crime and deceit, a web from which there seems to be no escape. Pursuing your dreams can be an expensive business. 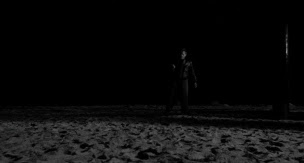 This movie is included in the Columbia Film Noir Classics III DVD boxed set and the transfer is superb. There’s a brief introduction by Martin Scorcese. I’ve never liked Scorcese’s own movies but I do enjoy hearing him talk about old movies. There are a few other extras as well.

Drive a Crooked Road is an excellent and unjustly neglected film noir and is highly recommended.
Posted by dfordoom at 10:29 PM