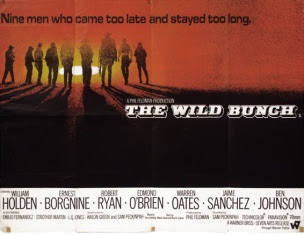 Sam Peckinpah’s The Wild Bunch is seen by many as a landmark film, the last of the great westerns and the beginnings of the modern (or even postmodern in the eyes of the more silly and pretentious critics) western. At the time of its release in 1969 it was highly controversial because of the unprecedented violence of the film. It’s a movie that is difficult to judge rationally since it tends to provoke very strong feelings especially among its legion of admirers.

What The Wild Bunch really is is a moderately interesting western of the second rank, not in the same league as the truly great westerns of John Ford, Howard Hawks or Anthony Mann. It’s as good as the better spaghetti westerns, but that’s not saying very much.

The movie opens in spectacular style as a group of US soldiers arrive in a Texas town and proceed to rob the local bank. They’re not soldiers at all, but outlaws. And waiting for them to emerge from the bank is a group of bounty hunters employed by the railroad (the money in the bank being mostly the railroad’s money). The result is a bloodbath which leaves half the gang, many of the bounty hunters and a lot of innocent bystanders dead.

The gang is led by Pike Bishop (William Holden). His chief lieutenant is Dutch Engstrom (Ernest Borgnine). The bounty hunters are led by Deke Thornton (Robert Ryan), an old friend and former accomplice of Pike’s. Thornton didn’t want this job but it was either that or return to prison. When the surviving members of the gang are safely away the stop to divide up their loot, only to found that the bags that were supposed to contain gold contain nothing but worthless washers. The whole thing was a setup staged by the railroad which was determined to put an end once and for all to Pike Bishop’s train robberies.

The gang meet up with old-timer Freddie Sykes (Edmond O’Brien) and head to Mexico. There they are employed by a corrupt general to rob a US Army train carrying a shipment of guns. Pike agrees to let one of the gang members, Angel (Jaime Sánchez), have one crate of guns. Angel’s village was ravaged by the general’s troops and his girlfriend ran off with the general. Now Angel wants to join Pancho Villa’s rebels and take revenge on the general. But things don’t run smoothly this time either, setting up an ending that is as apocalyptic as the opening sequence.

The movie was based very loosely on the exploits of Butch Cassidy whose gang was known as the Wild Bunch. The Wild Bunch of this movie is a group of ageing outlaws whose time has passed them by. They should have been living in the days of Jesse James, the days of the Wild West of legend. Instead they are still around as the First World War is beginning. Both they and Deke Thornton are out of place in the world of 1914. This is the main theme of the movie, the passing of an age and a way of life, a theme Peckinpah explored much more interestingly and much more sensitively a few years later in his greatest film, Junior Bonner.

To tell his story Peckinpah assembled a cast of ageing actors, all of whom give fine performances in spite of a script that doesn’t give them much to work with. Oddly enough, given his excellent performance, William Holden was just about Peckinpah’s last choice to play Pike Bishop. Gregory Peck, Charlton Heston, James Stewart, Burt Lancaster and Robert Mitchum were among a host of actors who turned down the role. Lee Marvin finally accepted the role but then withdrew in order to star in the ill-fated musical Paint Your Wagon (in retrospect not one of Marvin’s better decisions).

Robert Ryan was also not Peckinpah’s first choice for the role of Deke Thornton. He got the part after Brian Keith turned it down.

Visually it’s an impressive movie with some good use of Mexican locations. Lucien Ballard was responsible for the cinematography and does a fine job.

Then there’s the violence. Not very extreme by today’s standards (although the callousness with which innocent bystanders are gunned down is still fairly shocking. By the standards of 1969 it was very extreme indeed and ignited a major controversy with defenders of the movie often falling back on the fatuous notion that such graphic violence has the effect of shocking the viewer into a revulsion against violence. This argument was trotted out by people who had clearly never encountered a real cinema audience. As always happens with violence it ends up being self-defeating and lacking the impact that was intended. Mostly it’s tedious, and this movie is no exception.

The movie’s biggest problem is that there are no heroes, only anti-heroes, which tends to work against it. It’s difficult to care much about the disappearance of a way of life or a code of “honour” that is represented by pathetic losers like this lot. Pike Bishop waffles on about loyalty but in fact he has to spend much of his time stopping his band of losers from cutting each other’s throats.

The Wild Bunch is not a bad movie by any means but it’s not a great one either. It ranks with Bonnie and Clyde as one of the most overrated movies of the 60s. It’s worth a watch but it’s not exactly a life-changing experience and the movie’s influence has been almost entirely bad.