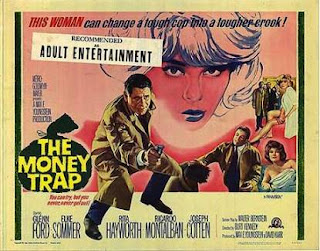 The Money Trap was made in 1965, but despite a few superficial nods to the 60s (the 60s-style house, the presence of 60s eurobabe Elke Sommer in the cast and the fact that heroin plays a part in the plot) it’s really much more of a classic film noir than a neo-noir. It is in fact one of the very last of the film noir B-movies. And that was its problem at the time - it was a type of movie whose time had passed. Looked at today though it’s a reasonably solid B-movie that is old-fashioned but in a good way.

Glenn Ford is tough middle-aged cop Joe Baron who happens to be married to a very young, very beautiful and very rich woman named Lisa (Elke Sommer). They’re both living the high life on the dividends that Lisa’s father left her. They have a fancy modern house with a swimming pool and servants, very different from the lifestyle of the average film noir cop hero.

Then trouble strikes. The dividends dry up and they face the terrifying prospect of having to live on a cop’s salary. This idea appalls both Lisa and Joe. So now we have Joe set up to be in temptation’s way, and temptation soon comes knocking. It comes in the firm of what seems a fairly routine call. The wealthy Dr Horace Van Tilden (Joseph Cotten) has shot a burglar in self-defence. It all seems pretty straightforward until the dying burglar tells Joe that the safe contained half a million dollars. Why would even a wealthy doctor have that much money in a safe? The reason is obvious. The money comes from something illegal, something the doctor doesn’t want discovered. In fact Dr Horace Van Tilden is a Mob doctor.

The thought now occurs to Joe that if someone were to steal that money Dr Van Tilden could hardly go to the police. And if the someone that stole the money happened to be a cop the doctor would be an even more awkward position. And half a million dollars would go a long way to ensuring that Joe and Lisa can continue their luxurious lifestyle.

Joe’s partner Pete (Ricardo Montalban) quickly figures out what Joe is planning, and he wants in.

There are complications. The burglar’s widow Rosalie (Rita Hayworth) is an old flame of Joe’s and that flame gets fanned into life again. The plan to rob Dr Van Tilden’s safe seems foolproof but Van Tilden is a step ahead of them and things go badly wrong, setting up a classic noir ending.

Joe Cotten, Glenn Ford and Rita Hayworth may have been past their prime by this time but they were all professionals and they give a good account of themselves. Hayworth in particular is very good indeed, world-weary and tired but still with a hint of the old glamour smouldering under the surface. Elke Sommers speaks seven languages fluently so the English dialogue presents no problems for her and the underrated actress gives an effective performance, playing Lisa as both a spoilt rich brat and a rather nice person at the same time. Lisa loves money, but she loves Joe more. Both Lisa and Rosalie fulfill some of the functions of the classic femme fatale without ever actually being a femme fatale.

Director Burt Kennedy does a competent if unexciting job. Walter Bernstein’s screenplay doesn’t have a lot of depth to it but it does tick most of the noir boxes and the strong cast is enough to carry the movie. The heroin and the money both act as a McGuffin, being unimportant in themselves but being vital as the catalyst for the plot.

The Warner Archive MOD disc is up to their usual high stands. The transfer is anamorphic, preserving the film’s original 2.35:1 aspect ratio.

Movies like The Money Trap had already had their day by the late 50s and making this movie in 1965 was an odd decision. When the cop film re-emerged as a major money-spinner in the 70s it was in a very different form, with big budgets and lots of graphic violence making The Money Trap seem even more of a museum piece. Don’t expect anything sensational but if you’re a noir fan and you treat it as a very late entry in the noir B-movie cycle you should enjoy this one. Recommended.
Posted by dfordoom at 5:10 PM